Jonathon Oxlade and Trent Baumann were making a performance for children in the 2004 Out of the Box Festival, and asked me to compose for it. Jonathon had designed my 2003 show Show and we’d started working together on making our first picture book The Empty City

Scribble was a non-verbal piece about two opposing islands: one industrial,  one agrarian. The Builder’s all about straight lines, the while the Farmer’s all about curly things. They collide, entangle, and both are changed. It was a simple seeming meditation on creativity and difference, but very complex in its execution. 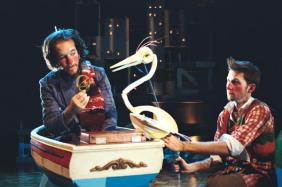 The sea between the two islands is navigated by ‘The Fiddler’, an onlooker who plays the violin while floating in a boat. The Fiddler was musician and visual artist Jan Van Dijk.

I needed to create a (pre-recorded) musical and sonic foundation for this beautifully designed world – a non-stop 45 minute soundtrack that’d unambiguously set up the oppositions in the play, as well as offering emotional subtext and a range of original sound effects. Part of the brief was to co-compose with Jan, who would float about, playing violin in his boat.

It had been a while since I’d done a theatre soundtrack. I’d been working with Brett Collery on film soundtracks. He was set up to record music with rather high fidelity. I was not. I had a Sony ECM-MS907 microphone, a computer with a very basic recording program and a laundry-strewn spare room.

I told the guys that it was likely the soundtrack would sound a bit ‘cardboard-and-stickytape’ but they were alright with that. These excerpts are a mix of the original demos and the final soundtrack, timed to action.

The soundtrack was going to be acoustic, mostly played on folk instruments such as guitar, banjo, mandolin, and uke. I overdubbed piano, but had to go travelling to various places around town to find them and record them onsite. I’d rather use ‘real’ piano sounds than synthseised ones.

The world of ‘the Builder’ would be more technological. I made these sounds with a Casiotone I found at a market stall. The only language in the piece was ‘phone calls’ made by The Builder and I decided the audio for these would be reversed, creating another language.

Instead of composing directly to a script, which was changing from week to week anyway, I just started recording music whenever I could, around childcare and work commitments, building up a bank of demos, which I shared with the team. I got signals from them as to which ones they thought would work, as well as the occasional direct brief. 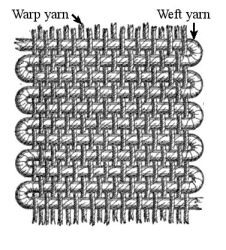 Jan sent me rough demos of violin parts. Unmoored by any sense of a chordal structure, I just had to speculate and work out where he might be coming from by ear. We didn’t converse much. He was busy devising the work with Jonathon and Trent. While I tried to compose precise backing for his compositions I mostly made soft ‘beds’ of music for the violin to gently toss and turn in. Just as he ‘floated’ in his boat (a beautiful prop operated, Flintstones style, pushed along by the feet) in an imaginary sea, his violin would float in textured wefts of sound.

I like the word weft. It has its origins in the creation of fabric, the ‘weave’ being a useful metaphor for the intimate, integrated relationship between music and performance. Chion defines the ‘weft’ as “a type of excentric sound of prolonged duration, created by superimposing prolonged sounds”. I liked making these. I’d clear away the toys and clothes, and I’d mix my electric accordion with gently plucked ukes and mandolins, seeding through seagull sounds I made with my mouth and then digitally processed. As well as percussion on wine glasses, kitchen implements and the containers of cleaning products. Occasionally I’d have to abandon a take if someone rode past on a Harley, but really, I’d resigned myself to the organic nature of the recording process. It might be a bit noisy but it’d have a lot of heart. Lacking any skill in audio mastering I’d just make sure the wave forms were the right size, and hope for the best in terms of in-theatre volume.

When it came to syncing the music with the action, it was a bit fiddly, as I’m not very technically minded, but having had the experience of working non-verbally to pre-existing music, decided to present the soundtrack as twenty or so relatively large ‘chunks’ comprised of quite precisely timed components and sequences. These were timed to rehearsal, and re-drafted as necessary, but effectively the performers were working to the soundtrack, rather than the other way around.

I presented the various drafts on CD, and redrafted as requested during the intensity of production week. Sometimes tunes had to be truncated or lengthened in ways that didn’t make musical sense, but because of the way I’d developed the two worlds, still functioned as sonic leitmotif for each of the worlds.

There was an iterative conversation between the play and the music that by necessity, had to move towards a fixed point, beyond which nothing could change. There was ‘breathing room’ in the weft/fiddle parts, which could be of indeterminate length.

It was unusual for me to be in a support role, rather than at the centre of the maelstrom of creating a new work. These guys had a lot to coordinate, and some of the direction they were getting in the process was impeding rather than clarifying their vision.

However the show was lovely: unusual. The children enjoyed seeing the logic of the two worlds emerge, and the nifty devices cooked up by Jonathon’s design brain. The style of performance made little concession to preconceived ideas about what performing for children ‘should’ look like. Its European influences were clear. Its parable-like tone and quirky story was like having privileged access to some kind of anthropological experiment. It could have been from the CzechRepublic.

Just as the world of Scribble (in fact and in its fiction) was about the relationship between  the seemingly independent and the seemingly mainstream,  between straight lines and scribbles, the meeting of the pre-determined and predictable with the happy accident, this soundtrack talked with the play, as it walked through a strange landscape.

Using no words at all.