Graduating from university felt like a precipice. I don’t think I am alone in having experienced this. It was heightened by the desire I held to perform, and the slim possibility that I could be paid for it. By 1990 I’d been in a few plays, some framed by formal requirements of the degree, others I’d gotten involved in because they seemed interesting, I liked the people,  or felt I had something to learn. I’d started a band. I’d worked as an artists model. I’d devised my own performance to the tune of a violin concerto. I’d delivered groceries.  I’d even attempted a beard in lieu of a developing character for a Shakespearian play. Therefore I could perhaps have been observed to have demonstrated some drive and initiative, but it already had its own twist and focus on coming up with something original: carving out my own space rather than moulding to a pre-existing template. It’s tempting to re-frame things in retrospective, to paint a picture of a young man with a plan. But I had no idea what I was doing. I had an instinct that I could make a reasonable fist of whatever I put my hand to, but had the kind of lack of confidence that plays as arrogance. 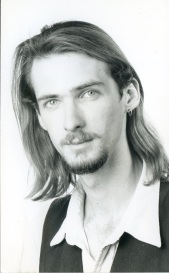 I hadn’t studied ‘acting’ per se, it was more of a generalist drama degree with a fairly large theoretical component. I’d done some literature subjects as well,  enough to gather the required second teaching area that would constitute the ‘fallback’ of drama teaching in case what I was reaching for turned out to be air. Then,  as now, as always, there were few ‘jobs’ for actors, and an oversupply of young ones who weren’t very good. Like the rest of them I did a number of auditions, including one for TN2, a troupe run by one of the two professional theatre companies in Brisbane. This was the TN! Theatre Company (1971-1991),  not to be confused with the current Twelfth Night Theatre in Brisbane. There were about thirty or forty people at the audition, for half a day in an old industrial space in Fortitude Valley, next to a nunnery. I recall doing individual audition pieces and exercises in which small groups were expected to improvise and collaborate; a distinct challenge in an environment where we were actually competing for a paid position. A paradox because an audition is about drawing attention to yourself, and collaboration most often requires you to put the focus on others. 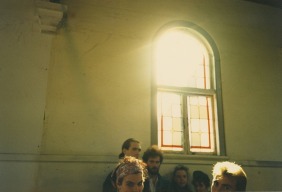 At one stage the director, Sean Mee, set up a scenario where ‘performers from all over the kingdom’ had been summoned to ‘make the sad little prince smile’. Or something like that. It was a clear challenge to make ’em laugh. The desperation of those assembled became very clear in those minutes, and for the most part was far from funny. I chose to present a team gymnastic display as one man. I can only speculate that there was a combination of absurdity and performative gravitas that had a comic effect. Also being tall, thin, and far from athletic there may have been a combination of chutzpah and vulnerability at play. I got the job, alongside three other actors,  Julie Williams, Andy Foreman, Barbara Fordham, and later Angie Quick. My ability to play music may have also been a factor. Our brief was to make two new shows,  one for kids,  one for teenagers,  and spend most of the year touring the state playing to young audiences. We made two shows: Blah Media Blah was a sketch-based piece about mass media devised in workshops by the group, then gathered in a script by Sean Mee. For this piece we played multiple characters, and all played music as well. I worked out how to program a drum machine, and assisted in making the backing tape for the show which was played on a revox reel-to-reel player.

The main innovation of this machine was that you could edit clear leader tape into it so the machine could turn itself off inbetween sound cues. Therefore we could operate our own sound from the stage. I arranged for my electric guitar to be mounted on a stand so I could just walk up to it and play, rather than strapping it on. I usually had a prop television on my head as well so the show was pretty quirky, and combined comic smarts, manic performance and a brand of satire that didn’t treat kids like they were stupid. Therefore my first professional performance as an actor was in Weipa,  far North Queensland,  doing Blah Media Blah for the kids up there. The mining company up there was a sponsor. Big bad business bankrolls the arts while the arts lampoons big bad business. Sponsorship? Symbiosis? Parasitism? There’s a lot of it about. The kids got a really good show out of it though. One of the musical tags for the show was an adaptation of Trio’s Da Da Da – not too hard to program drums for that one.

The second show we did involved some workshopping also, though it was written by playwright Valerie Foley. 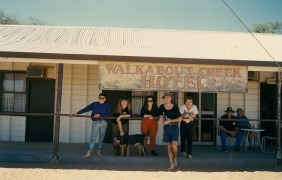 It was called Clouds, and was a backyard adventure aimed at lower primary kids. This too,  was fun and grounded in respect for kids, who they are, how they play,  and how they get along with eachother, themes I’ve followed through in my own writing.  Neither show was didactic. We completed the Clouds with a skiffly tune played on accordion,  ukulele,  spoons and harmonica. A backyard band.

Both shows were an early influence on me,  partly because of how they involved music, but mostly because what the ensemble devised in process had influence on the final product – our roles as performers were creative,  not just interpretive. On tour we did three shows  a day, with driving inbetween,  and the intensity of this kind of artistic labour teaches you what’s required to make a performance work, both on and off stage. While behaving irresponsibly in my own life I took pride in my apprenticeship, and emerging professionalism, and took seriously the school as a workplace. Rod Wissler was performing the one man show Brief Lives  about philosopher and historian John Aubrey (1626-97) in the mainstage season at TN,  and the script made reference to a lute player next door. I provided the sound for this,  learning two John Dowland tunes, adapting them for the guitar, and recording them for playback onstage. I did it for free. I loved sitting in the dark listening to my muffled playing contributing to the antique world of the performance. I still play these tunes often: John Dowland was the archetypal singer-songwriter, but that’s another story.

The year of making theatre and touring came to an end and alongside Barbara I secured a role in one of the company’s mainstage productions for 1991: Moliere’s Imaginary Invalid. This production also involved music – I played mandolin and harpischord, playing the continuo for a cod-opera that Eugene Gilfedder composed for a central scene. I had to learn both pieces by ear, and practice very intensely. It was a large cast, my principal role being that of the unsuitable suitor: the idiot who the beautiful daughter is being forced to marry. The ensemble played multiple roles, and for me this meant being a minstrel and doctor. It was a bit of a shock to my system for me to be suddenly in a traditional rehearsal room. There’s lots of evidence that everyone should know what they are doing: there’s a script that’s 321 years old, a lot of experienced actors,  a director,  designer etcetera, and yet nobody seemed to know what was going on, while pretending everything was OK. As a young person,  I had made the common assumption that the ‘grownups’ knew what they were doing:  incorrect. More importantly I realized I preferred the collaborative buzz of devising to this kind of work, which was probably closer to what most people imagine ‘acting’ to be. 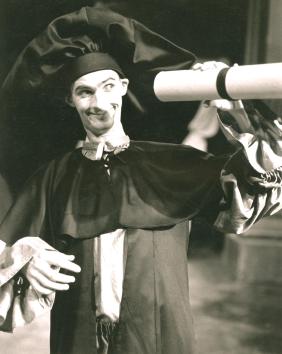 I had little idea of what to do as a performer, and looked for guidance that wasn’t there. I was glad to have music to hold onto. Performance-wise I sensed I was lagging behind and made the simple, and somewhat desperate decision to pull and hold a really stupid face, and that would be my character. A flesh mask,  as it were. It was deemed to work, so I stuck with it. The most similar experience I’d had previously was working as an artist’s model for a the Human Factor sculpture series for Expo 88, having my body and face cast in plaster: holding an expression until the mould set,  then peeling my face off the inside. Most unusual,  but designed to make an impression.  It was also quite authentic of me to be performing a character who didn’t quite know what was going on. Nevertheless it got lots of laughs and good reviews for what was basically upstaging.

“…here is a discerning actor with the ability to control and focus his energy, and above all he has found a delicate but strong performance style which serves the comedy well.” The Australian 4/3/91

You may have noticed an emerging theme in these writings: a curiosity, or perhaps suspicion about what underlies people’s perceptions of  ‘success’. As a teacher of young artists I’m compelled to keep enquiring in this area, and not only from my experience. It’s easy to sell a popular dream,  and that’s partly what sustains magazines, movies,  pop music and most of the dodgy agencies and performance schools that prey on young people, by their mutual agreement.  However if they’re taught creatively they’ll come to grips with their own version of success,  on their own terms.

Success,  for me (at this time in my development) was to work (and to work well) in good works, but I hadn’t thought about it much beyond that.  A review appeared in the Australian. Evidence. I cut the review out of the newspaper, but it didn’t feel like success. It felt thin and papery.

Blah Media Blah was revived for a mainstage season that year, with edited and enhanced material,  and I was 18 months into a career as a professional actor/musician. I went on to get other gigs elsewhere, and tour a lot. Some of these shows were good, others pretty ordinary,  and the same could be said for my work in them. While I could ‘perform’ pretty well I found that I had no fascination for the facile psychological mechanics of ‘acting’. As much use in getting there as an exercise bike. I’d had a pretty good streak of gigs for someone just starting out, and it had been good to start in such a supported way,  creating works of quality and integrity.  I’d played music in almost everything I’d done professionally, and figured that made up for my deficiencies as an actor. I hadn’t enough experience at that point to know that acting and performance are similar,  but different,  yet extremely potent in combination.

The TN! Theatre Company was closed down. I don’t think its story has been comprehensively told.  It now exists in 177 boxes in a library,  and of course in the memories of its workers and audiences. In the next few years I went on to intertwine freelance acting work, musicianship, songwriting,  further education and making my own works,  but I’ve no intention of exploring that in detail here. What matters is I found the right key to play in: I discovered my heart lay in making new works, with music at the core.