Fade in. In a share house I hear a jangling guitar coming from the telly and find it’s a song called Obscurity Knocks by a band called Trash Can Sinatras. I can’t see them – the video’s a Rube Goldberg contraption – but I can hear wordplay, a keening yearning in the vocal and an unfashionably bold chorus. I track down the cassette. an album called Cake (1990), of which I savour every piece. 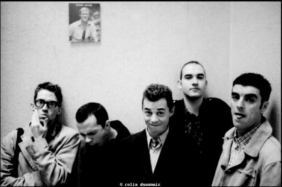 As second album called I’ve Seen Everything (1993) emerges. They’re Scottish, I now know, and the songs just get better and deeper. I go see them play in-store at Tower Records in London while I’m there in 1996. Loving their music, I’m keen to see what it’s like to be in its live presence. Not too good as it turns out. The music’s played with an unexpected passion that morphs into a kind of fevered desperation at odds with their often quite gentle songs. The lead singer, Frank Reader, splatters his acoustic with blood from the finger he’s cut on his strings. I’m sure I’m not alone in hoping he’ll at least pause between songs to apply a Band-Aid. He doesn’t. It’s not rock and roll bravado, that’s not their style. It’s something else.

My journey continues, into my own writing and playing in London and home in Brisbane and this being pre-internet I’m not sure what happens next. Unbeknownst to me Trashcan Sinatras release another album A Happy Pocket (1996) but are troubled by, and then dropped by their record label, at a time when it mattered very much to have a record company behind you. Maybe that explained the blood on the guitar. 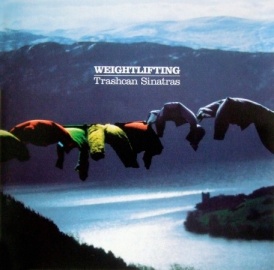 Then, six years later, there it is. In a shelf, in one of the last record stores in Brisbane. A physical encounter in a space dedicated to music retail: quite an old fashioned occasion. On the CD cover, a line of washing flaps like prayer flags across a green landscape, making a mountain of its own. Interesting. Who’s it by? The Trashcan Sinatras. I cannot believe my eyes. Weightlifting (2004), it’s called.

It’s marvellous. A banquet. I’m listening to it in the car as I drive home from the record shop to my lover and child. Then there it is at the end of the record. The title song: Weightlifting. It starts modestly, an E-Z play bassline and minimal beat, across a chord that makes it all seventh-ey. Only a band that knows exactly what they’re doing opens up with something as simple and skilled as this. Frank Reader’s imploring tenor :

i discover the wheel and watch the buildings go by

you talk a little soft, turn off the radio

He’s apparently in the car with me. A coincidence, sure. But this song: there’s so little to it in some ways, so little to hang your understanding on: but that’s not what music’s for. Songs are there to be apprehended, not comprehended.

Then the verse releases and the chorus opens up: twin guitars peal out, winding around the elegance of the change and billow of the backing vocals.

(Weightlifting starts at 13 min 25 secs) The words ask the addressee of the song to share what’s inside. The music tells you that it’s going to be OK if they do. Such a desire transcends the particular (the steering wheel, the radio, the winter, the sunlight on the face, the empty nest) and pushes the listener tenderly towards the universal. It’s lush and soothing. A plastic disc, a cassette, or the zeros and ones of an mp3, it doesn’t matter; this music’s been made with love, and it doesn’t matter what format that comes in.

It’s a stunning song. I revisit it many times. That day, and in the years to come. I learn to play it. Approximately. It’s one of those songs that you don’t want to spoil the mystery of by getting inside it technically. I hear my son murmuring along to it as we drive to his kindergarten. Poor kid, I’ve obviously been thrashing this tune. At least it’s not Slayer. At harder times this piece of music is like a warm shower, a calming influence. When there’s a lot going on in lives big and small, this song cuts through the crap with its poignant request. I find it nourishing,  almost medicinal. Songs can do that. 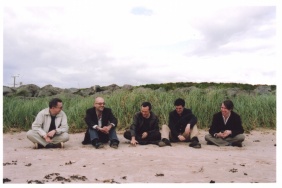 I catch up on the story of the Trashcan Sinatras via their website. I track down every record they’ve made and buy it. I can see how they’ve hauled themselves out of a really difficult situation with perseverance, the love of their fans, their connection with each other and the power of the music that they make. These guys don’t give too much away, but it’s an inspiration. To keep going. Their songs washed up on my shore: I have seen mine wash up on someone else’s, or at least knock obscurely at a few doors and be let in.

My funny little band is in the doldrums, between albums, staring down the barrel of middle age and disinterest.  I note there’s a ‘covers’ section on the Trashcan’s website. The lead singer, Barbara, and I, record a version of Weightlifting in a rehearsal room, with a gecko singing along. I overdub some other guitars and my mate Sam plays some double bass. Not a patch on the original, but still a loving tribute. I send it to their webmaster. It’s published on their site and I’m happy with that.

But then John Douglas from the band writes back:”hello goodbye notes… what pleasure you have given us with your beautiful version of weightlifting… i first heard it in snow covered boston in february, at joe’s house in the early afternoon after a late night with jack daniels .. my head was fuzzy and you made the day with your waltz time and understated arrangement… the double bass sublime…and the guitars hanging back beautifully … the soft brushes … and the singing .. the singing is beautiful… wonderfully restrained .. you really capture the essence of the song.. thank you … all the guys in the band agree .. we walk taller now… a spring in our step .. thanks for your empathy and inspiration and good luck in all you do… please keep in touch and hopefully our paths will cross sometime love, john”

I’m stoked. I’m grateful he’s taken the time to respond. I understand more closely how the internet enables a new kind of reciprocity between fan and band. This kind of care and contact is probably one of the reasons why TCS are still going after more than 20 years. I persevere and keep writing and playing music, because (to paraphrase Dylan Thomas) “…I’d be a damned fool if I didn’t” 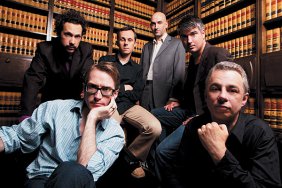 I fly to Melbourne to see the Trashcan Sinatras play on their only Australian tour (2006) with my mate Jonathon. I don’t really have the money to be doing that. They play beautifully, focussing on the music, a showbiz-free zone, and it’s great. I’m drunk on the music and just drunk. I could chase the connection further and meet them personally but that doesn’t feel right on the night. Jonathon buys me a TCS shirt and I fly home.

I pre-buy the super-expensive Japanese import of their next album In The Music (2008) and I’m a rusted-on fan-boy(man).

Weightlifting retains its power for me: mysterious, tender and compassionate, uplifting. It seems to resist its own fade-out. I shall do the same.