Warmwaters began with two ideas, and two performers. Two friends. Bridget Boyle wanted to play with her idea of ‘Dagaret’, two dags doing cabaret. I’ve always found Cabaret pretty daggy myself,  so I was up for it. I’d long harboured the idea of writing and performing songs with a new persona, an egotistical singer-songwriter unaware of his own pretension. Not sure where I got that idea.The earnest authenticity of folk music was something we both loved and seemed a good place to start. We joined these ideas together into something we’ve subsequently discovered is an extreme rarity, a male/female musical comedy duo. Lena and Luke Warmwater.

I suggested a central premise that maybe this pair’s songs could all be about sex, but that they were the only people that didn’t know it. This seemed to me an invitingly simple, crude, almost dumb idea. Most of all we wanted to work and play together,  and resolved to keep it fun.

I wanted the act to start with the music, so experimented with deliberately writing songs that were ‘bad’. The release you feel from sitting down to write or compose something that ‘doesn’t have to be very good’ makes the process very enjoyable.

Another challenge was to write duets which contained a double entendre that was both readable by an audience, but could still be performed ‘straight’. This was a conscious effort to be sophomoric: writing songs for characters who are unaware of their own ignorance in playing them. Sex soon blossomed out into other bodily functions,  and some of these bad songs turned out good.

Some of the more genre-based parodies I was writing seemed shallow musical in-jokes, and didn’t make it into the repertoire.  They didn’t have their own life, and were dependent on shared pop-culture for their respiration. They stayed in the vault. Essentially I needed to write ‘in role’, and found the person I was sending up was probably myself. Before long, lots of pleasurable subtleties began to weave themselves around this ‘dumb idea’.

I demoed the tunes at home, played or sent them to Bridget, and on the strength of the songs we decided to move ahead. Bridget’s a good flautist as well as vocalist: we rehearsed up a couple of our favourite tunes and found it was a pleasure, and so decided to keep it that way for as long as possible. I was concerned that we should go ‘music first’ in developing this idea, and not work at all on developing ‘characters’, rather to allow two different personae to emerge.

To refuse to end-game the performance is in some ways  to apply musical, compositional strategies to the making of a show. It was an initial aim that we could plausibly play a real songwriter’s circle, and not be immediately noticed as being ‘comedians’. To bring theatre to music and music to the theatre without ruining either.

It turned out that Bridget and I played quite well together musically. It became clear that if we wanted to experiment with ‘professional amateurism’ – that is,  being ‘bad musicians’,  we’d have to take a different approach.

We were too good to be bad, and at this early stage it would be too contrived (and require too much time and rehearsal) to engage with the delicate art of simulating ineptness. You have to be extremely skilled to play music badly convincingly. That seemed like one layer too many for the act, so we just enjoyed  making the music the best we could, and the process became very much like other ones I’d experienced when starting bands. The dodginess was not in the music itself, but in the performance of the music.

We started to discuss the relationship between the characters, but I was most concerned not to develop any ‘backstory’. It seemed important to have these characters live only on the stage, and it seemed not only cruel, but irrelevant to send up anybody other than ourselves. I like songwriters. I like folk music. I like amateur performers,  and see no point in creating more ‘mean’ comedy,  of which the world already has far too much. 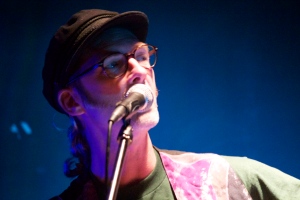 Of course I was aware of ‘Mitch and Mickey’, characters in Christopher Guest’s Folk-Spinal Tap A Mighty Wind. They’re a lovely pair, beautifully rendered, but like everything in that film you get more enjoyment out of it if you know the obscure pop-culture references, and choose to engage with their exquisite performances dramatically: that is, buy the idea that they’re playing out a very particular past in the present – a personal/professional past that played out in public. There are a lot more inspiring male/female duets in music than you’ll ever find in comedy.

Because we’d decided not to work on characters or back story, for Warmwaters there was no drama, no pretending, no beginnings or endings, only good songs and a little patter to frame them. This meant that sometimes in rehearsal it was unclear when we were ‘performing’ and when we were not. Inspired by Donovan, I purchased a Greek sailor’s cap and tie-dyed waistcoat and thought that would be enough of a gesture towards ‘character’ for the moment. Bridget’s pageant of outfits were a constant surprise.

A mammoth research/recording  project that comes out of QUT music which has gone under various names, offered an opportunity for us to record these tunes in a studio.  At that time the project was called 100 Songs,  alluding to the central challenge of recording that many songs in 100 hours. I had entered a couple of Warmwaters tunes as ‘Luke Warmwater’ ,  not thinking we’d be noticed at all, and yet we were given a slot. We were both rather surprised by this turn of events, but rehearsed and prepared our arrangements.

I started shooting video with a view to perhaps creating a documentary about the duo’s ‘comeback’ or ‘discovery’, and found very rapidly that to be spontaneous, especially on camera,  you need to be very well prepared.

The show-biz narrative of obscurity> discovery>success  is pretty dull even when it’s well done, and despite a certain frisson generated by the actual events, I chose not to pursue the documentary. This was the final nail in the coffin for ‘backstory’, even though the group now had a real one to tell. More compelling is the studio footage captured while we were actually recording the music.

Some time later, the project was looking for ‘lead tracks’ to release and promote to radio, and our song ‘Le Bonheur (Happiness)’ was selected as a tune that might get some traction. That was an exciting  development,  but it was apparently conditional on us changing the title of the song to ‘Happiness in You’. I’m not sure whose (well-intentioned) idea that was, but it was thought the joke wasn’t clear enough. At the time I thought it was perfectly ambiguous. I wanted to continue as we’d begun and so passed on the chance, therefore making the narrative of arrogance and professional failure Warmwaters were playing with,  for a moment,  real.

Warmwaters had written, rehearsed and recorded,  but had yet to play live… read Part 2

Stay tuned for more initial ripples of the Warmwaters. You can find the Warmwaters album here, a dodgy website here, and details about the Queensland Cabaret Festival show here.

One response to “Beneath the surface: Making Warmwaters (part 1)”