Tyrone and Lesley don’t ‘do’ influences. We’ve never attempted to imitate anyone other than ourselves. We know about genre and style but you only need to listen to one of our albums (or look at us) to clock we’re not slaves to any fashion. That’s why we never go out of style. Like you though, we’re music lovers, so there are bound to be some resonances between the kinds of things we make and do, and the kinds of things we hear. We’re making an album called OPTIMISM right now,(you can help us out if you like) so these songs are distant relatives of optimism.

Sometimes it takes other people to point out certain similarities, and sometimes we’ve never even heard of who we’re supposed to sound like. Then we go and find out who they are and have a listen.

This creative research is kind of musical detective work: beautiful to dive into, and especially attractive when you have more important things to do. Tyrone and Lesley thought we’d open the door to some of the music we love.  Look on Youtube or listen on Spotify below, there’s over 50 songs. If you can think of any more musical relatives, let us know.

T&L like music with no words and Optimism is bookended by two instrumentals. Here you’ll find gentle, ukulele-focussed pieces, others with piano – a featured instrument on the recording, and others a bit more hardcore, like Dawn of Midi’s precise, ever-shifting Io. We’ve killed two birds with the inclusion of an instrumental demo of a Randy Newman song – Brisbane singer and producer Leah Cotterell once said our writing was like his. We liked that. We’ve also sneaked in a tiny instrumental by The Kinks. Their music is impossible to categorise, and we like that category. 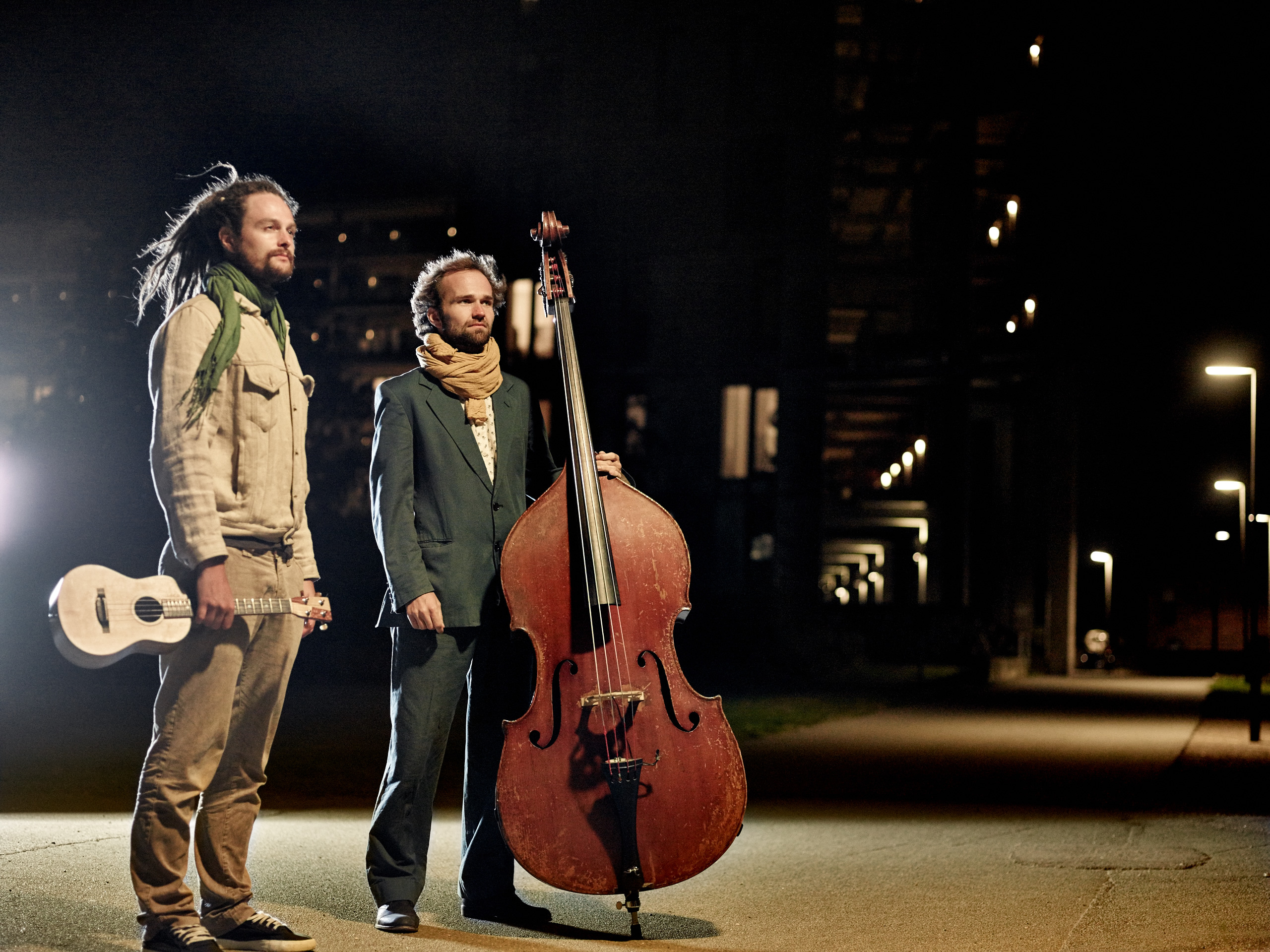 We’ve played alongside, or on the same bill as some great ukulele artists – not only brilliant instrumentalists, but great writers or singers, solo or in groups. Too many to fit into even this long list. It was Cairns duo Bosko and Honey who once said the Tyrone and Lesley write “children’s songs for grownups”. Kamuke Magazine said All Dressed Up (from our third album Gentlemen Songsters) “can be seen as an analogy for the entire record – inspired by tunes from the 1930’s, it’s a swinging dance anthem that evokes images of Tyrone and Lesley in tuxedos, drinking martinis, and staying up way past their bedtime”. It’s true we love old music. Songs or recordings that have stood the test of time. Some of this stuff is classic in the classic sense of the word. A good song never dates.

Other songs here are weird or playful in a way you tend not to find too much of these days and includes a song by Joe Raposo, a great writer who created pieces for Sinatra as well as Bert and Ernie. Brian May’s ‘Good Company’ by Queen is a great antique style story song – probably the first time David/Tyrone heard a ukulele, as a kid. Lyle Ritz is a bassist and ukulele player – the best of both worlds! We make and have made all sorts of music outside of Tyrone and Lesley. If you’re after soundtrack made up of ukuleles and electronica, or complex, heartful Jazz, there are treasures to be found in the work of Laique, Trichotomy and Sounds from the Empty City. Very keen music-heads might like to time-travel back to Friends of the Iguana, The Goodbye Notes,  the Doch Gypsy Orchestra or Every Man and His Llama.

Speaking’s different to singing. Unsung, or half-sung words play out differently teamed with music. Every album we’ve done has a piece like this on it, and that’s true of OPTIMISM.  Dean Denham from the Melbourne Ukulele Festival recognized the Dada in what we do-do. Someone else once told us we were exploring similar territory to Ivor Cutler. We’d never heard of him. Now we have.  Some of this music’s angry. Are you ready? There are lots of contemporary songwriters we could mention here. The layered guitars of Johnny Marr, for starters, but where would you start? The literate compositions of The Divine Comedy are a very distinct pleasure, and it’s more the sound of John Martyn’s longtime collaboration with bass player Danny Thomson that warrants his inclusion here. There’s a beauty and longing in some of these these acoustic numbers – a sadness that keeps its head up nevertheless. James See who engineered and mixed Optimism said that one of our tunes sounded like Elbow.

The sun and the moon are key influences on… everybody, day and night. Thanks for looking, listening or supporting our music. Good night. Or good day!

One response to “Tyrone and Lesley’s Relative Optimism: a playlist”