“10 of your favourite all time albums that really made an impact and are still on your rotation list, even if only now and then. Post the cover, no need to explain, and nominate people to do the same”

As well as ensuring we all stay engaged with facebook by providing them with free data, this is an opportunity to present a musical mask, where you choose only music that’ll make you look good, but I took the project seriously and whittled down my list truthfully. I think if we all own up to being dags the world will be a better place.

As a sprightly 48 year old man I wondered if this was an archetypally middle-aged meme in its prioritization of albums, as there’s a distinct experience of ‘getting into’ the music that comes from running your hands over the albums,  cassettes and CD’s that you don’t get from listening to music online. I can’t afford to be a vinyl purist,  but poring over gatefold sleeves, lyrics, production details and liner notes as I was maturing meant to me that it mattered who made this music, why and how. (what did that statement “No Synthsisers” tucked away in the liner notes for ‘A Night at the Opera’ actually mean?)

Add to this financial constraint and the physical search for music (and the writing around it) in a regional town where not much is available, and you’ll find the connection between music and identity is strong, and has a distinct generational flavor. That’s why this shared project focuses on albums you connected to when you were young. The music that hits you there,  hits you hard.

It’s interesting watching my child go on his own journey in finding music that speaks to him. Movie soundtracks have a bigger role to play, but peer group, alignment or resistance to ‘what’s popular’ and your parents record collection (and stuff you’d never find there) are also players, so in some ways not much has changed.  In responding to a social media algorithms I found I was thinking about personal algorithms that had in some way informed everything I’d done since, musically, in some way. There’s no need to explain. But I will. So this is what I chose, and why.

Because of the songwriting, the singing and deeply layered sounds. I’m still moved by this music. The cover image is interesting, the photograph, taken as a long shot and blown up, is a kind of intimacy viewed from a distance.

Queen: A Night at The Opera

Might have planted the idea of ukulele and 12-string guitar in my head. The variance of styles across the record and even within songs is a pretty good primer for all sorts of music. My interest in vintage songwriting was piqued by a couple of the pastiches on this record. Bohemian Rhapsody was all over the telly at the time. The last few seconds of Brian May’s song ’39 had quite an impact on me,  I feel like this musical moment was one reason why the 12-string guitar sang to me when I finally had one in my hands. 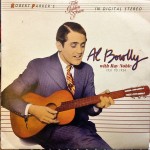 Al Bowlly recorded thousands of songs but none better than in this purple patch with songwriter and bandleader Ray Noble. I love the crafting of songs, their arrangement and performance. There’s humour, sentimentality and passion here. I find it funky. I’d probably first heard Al Bowlly’s voice in Pennies from Heaven. 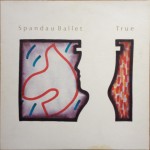 Detatched, controlled histrionics, great songwriting and production I found this stylish and soulful when it was released. It’s kind of dramatic. It’s only 8 songs long. 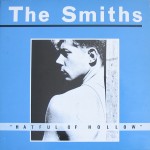 The Smiths: Hatful of Hollow

I got this as a dubbed cassette, so no details. Music alone.  Amazed by economy of the songs ,  the layered guitar playing,  the anguish and humour of the lyrics, the springy tightness of the rhythms section, and the sunshine on the dark water of the acoustic tracks

When I think of artists I look up to, I think of Billy Bragg. This is just my favourite record of his. The cello on The Only One probably ripened my ears for the potential of that instrument to contribute to an acoustic ensemble, as well as the benchtop poetry and domestic surfaces of the lyrics. 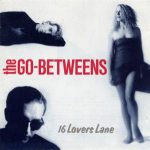 I like a lot of this band’s music, but to my ears this is their strongest set. The shimmering summeriness of the sounds and strong, heartfelt songs.

There used to be a CD library down the road from where I lived when I went back to uni to do teacher training. For a couple of dollars you could borrow a CD. There was a minor controversy at the time as to whether it was legal or not, and before long it was gone. It seems rather quaint now that most music seems stolen, but it was an opportunity for me to try lots of new sounds. The gradual assembly of the string and woodwind arrangement on Thoughts of Mary Jane. I’ve resisted the urge to connect music and memory so far,  but Cello Song is perfect for listening to on a train. Rocking on the Ipswich line out to Corinda State High to do my prac, all tucked in to my K-Mart pants.

Everything But the Girl: Amplified Heart

Intelligent, unironic love songs. Some of the musicians who play on this played on Five Leaves Left. Danny Thompson on bass. Love that sound. This, alongside 10,000 Maniacs, The Sundays and later, Hem were influences on The Goodbye Notes

Part of the joy of this record was finding out that this band was still going, and still good. They still are.